The Might to Rule: A Live Tabletop Role Playing Game Show

Come join us for a brand new adventure at Rain City Games this February! The first event of our year-round prosentation series, The Might to Rule is a live tabletop role playing game show, featuring 6 local artists, and game master Christian Ching.

What is a TTRPG Game Show? you might wonder. It’s like Dungeons & Dragons mixed with collaborative storytelling, and a little bit like storytime at the library. So you show up, get comfy, activate your imagination with us while the players and game master craft an adventure in real time, right in front of you. Who will you root for? How do you think the story is going to end? Come find out!

It is the beginning of Spring. The sun is shining, the ground is warming, and new blood is boiling as the denizens of Cherryglade fight for the right to rule their home. The Might to Rule is a one-shot tabletop roleplaying game set in the world of Root using the Root RPG system by Magpie Games and Leder Games, where we play as anthropomorphic animals in a forest torn by war. In this, we will follow a group of three vagabonds, the characters of our three players, as they adventure in the small artisan town of Cherryglade mediated by a game master who plays the world as well as all the nonplayer characters. In a mix of interactive theatre, improv, and game, The Might to Rule will showcase live collaborative storytelling, directed conversation, and open choice as the players make decisions that shift the power balance in the wood by answering a simple question, “What would you like to do?” 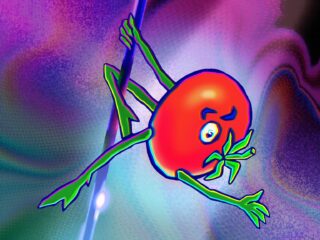 Next (n) My Little Tomato by Rick Tae